A Mother’s Persistence Pays Off 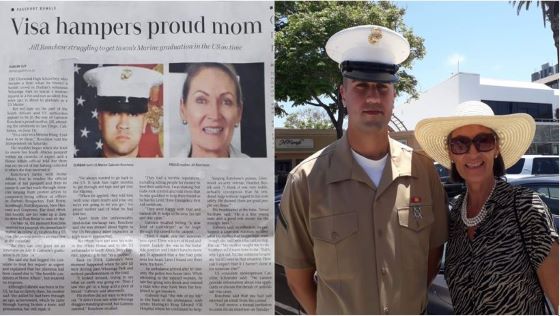 For many years I lived in Texas with my husband Marco and our son Gabriele. But after our visa for living in the United States expired, we were forced to come back to my birthplace, South Africa, with almost nothing.

After many years of hard work, my son grew into a handsome, 6 foot, 7 inch tall young man. Seeing no future for young people in South Africa, Gabe came to America and on December 3, 2018, he joined the Marine Corps Boot Camp. He fell during the hectic training and broke his knee, spending 10 weeks in recovery. What was supposed to be a 13-week Boot Camp turned into 6 months. I was adamant that I would attend his graduation, scheduled for June 14, as he had no other family in America.

For months I went to different Home Affairs offices, with the hopes of renewing my South African passport to travel to America, but there was always a problem that prevented me from doing so. But persistence always pays off. I finally received my new passport; the next step was applying for a U.S. Visa to visit America, which was another huge hurdle. After hours of research, I found out the earliest date for an interview at the U.S. Embassy was after Gabe’s graduation.

I knew I had to be there, so I requested an immediate appointment. I waited for two weeks with no response.

At this point, I was beyond frustrated. I contacted a journalist friend, who was willing to write the whole story. In the meantime, I wrote to the U.S. Ambassador in Pretoria, appealing for her help as a mother. In my desperation, I also wrote a letter to the White House, asking President Trump for his help, as the president and as a parent!

Thanks to my friend, the article, “Visa Hampers Proud Mom” ran in the national paper. While the White House never responded, I did get an email from the Consulate General in Durban allowing me to schedule an appointment for June 4.

But when I got there, I was interrogated for two hours about my previous 20-year stay in America; the official implied I had stayed illegally, even though everything was legal.

They took their time in issuing the Visa, sent my passport to Washington DC, just to double check that I was legit. I am unemployed so I had to sell my car to pay for my plane ticket, but I couldn’t buy a ticket until I had my visa. It arrived two hours before I boarded my plane. Nonetheless, I arrived in America 36 hours later.

Reflecting on this experience, I would do it all again, including all the sleepless nights and stress, just so that I could share that proud moment with my child, Private First Class Gabriel Ronchese. Being reunited with my son after 18 months and to be there for him was a moment that could never be replicated!

Jill Ronchese
Jill Byrne Ronchese was born 62 years ago in South Africa to an Irish-Catholic family. She attended Bible college in Dallas, Texas in 1988-89 and was married in 1994 at the age of 37. Jill had her son, Gabriele, at age 41. She has traveled to many parts of our interesting world. Now retired after 40 years in sales, Jill is hoping to relocate to America so she can enjoy her future grandchildren!