A Labor of Love to Her Hillside Landscape: Enjoying Kathy’s Beautiful Garden 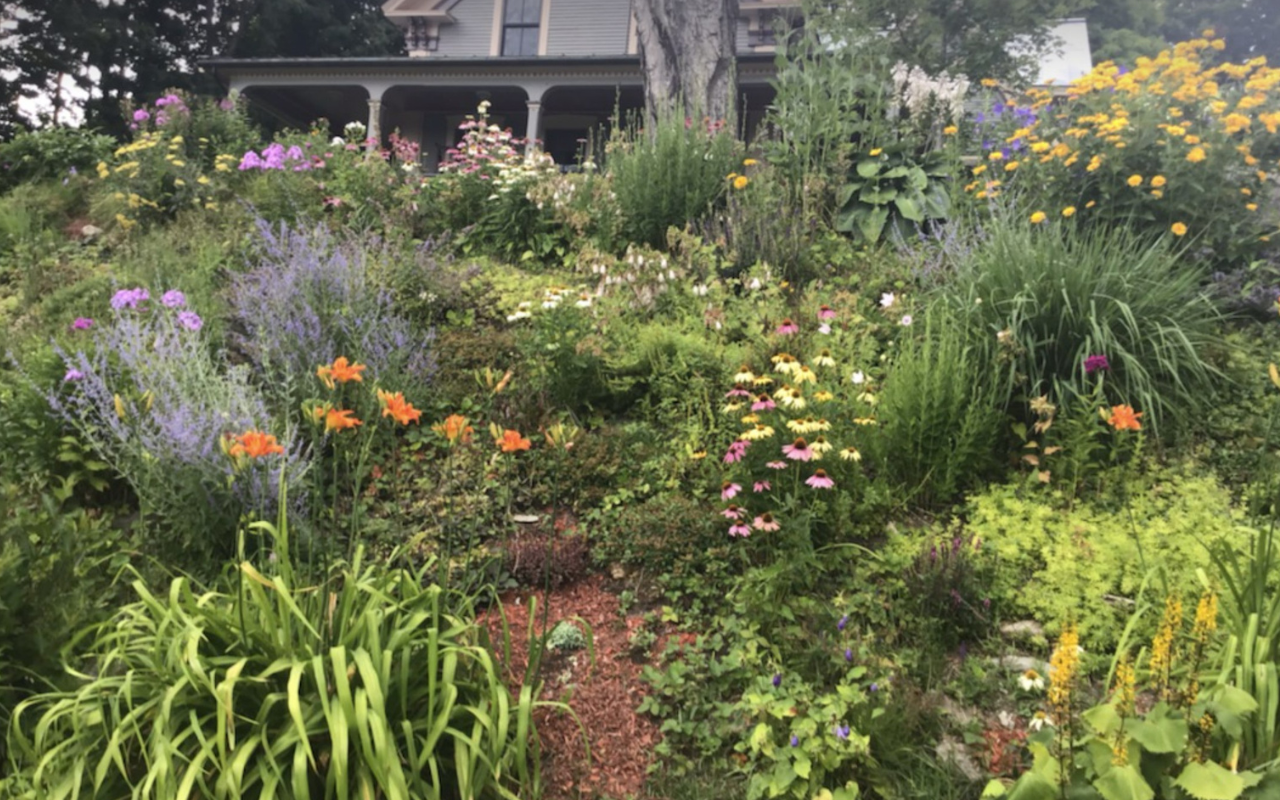 My friend Kathy has created a massive and beautiful garden on the large hill in the front of her house as both a delight to behold and a gathering of complementary plants. And it is certainly impressive! “Every morning I head out with a cup of coffee to look at my hill with a critical but loving eye,” she says. “I had never gardened prior to this venture. I now realize what I have been missing. It is a soothing and calming way to start the day.”

Kathy explains, “I have been working for five years, and the hillside and I have planted over 500 plants.” She started cleaning out the hill about six years ago when she was sick of looking at the Virginia creeper and massive vines that had overtaken the hill in front of their house.

Removing the disturbing growths was no simple task. A landscaper attacked most of the growth and then Kathy and her husband took armloads of vines and weeds to create a composting pile on a bank on the edge of a nearby stream. The weeds became rich soil, saving the nearby trees when their roots were exposed by erosion.

Her first concept for the garden included “a hillside of ornamental grasses to keep the hill from being eroded, but I also wanted a pollinator hillside.” Research revealed those two goals would collide because the ornamental grasses become aggressive and would take over anything else planted there.

Kathy began her garden with perennials with a specific goal of obtaining good ground cover but soon learned she planted too many too close together and a vast amount didn’t survive. In years two and three she began learning which weeds were what by using an app that identifies flowers from the photograph she would take. Thus, she sought more and hardier plants.

One portion of the hill hadn’t been cleared; removing the debris became a four-hour-a-day job which culminated in an area 210 feet wide with a 30-foot vertical drop. Because the land was so wide and steep, she began planting perennial bushes such as hydrangea and red-twigged dogwood on the newly cleared side. These plants pushed out many of the weeds and Kathy dubs them a huge success.

Kathy explains, “In years four and five, I confronted the ornamental grass problem. This year I pulled out much of the reed canary grass which has really tenacious roots and is very aggressive. This took quite a few hours as they had sprouted up everywhere. But I now see the fruits of my labor as the Russian sage and ground cover have started to spread.”

During this year she added several hydrangeas and spiraea which attract both bees and butterflies along with birds who love to sing.

The garden continues to absorb several hours each day. It’s hard work, and difficult to avoid stepping on the plants when weeding, but the results are worth the effort. Kathy and her husband love sitting on the porch and looking at the flowers. “Since we do not face the hill when sitting, I have planted weigela and several blooming bushes at the very top of the hill for us to enjoy. And I have enjoyed the challenge.”

A fellow gardener once told Kathy when she explained her dream to make the hillside a hill of flowers, “That is an impossible task. The only thing you can do is to let the lilies that are on the hill move over.” But Kathy has proven him wrong. “Needless to say, he was wrong, and as for those aggressive lilies, I am fighting to keep them from taking over.”