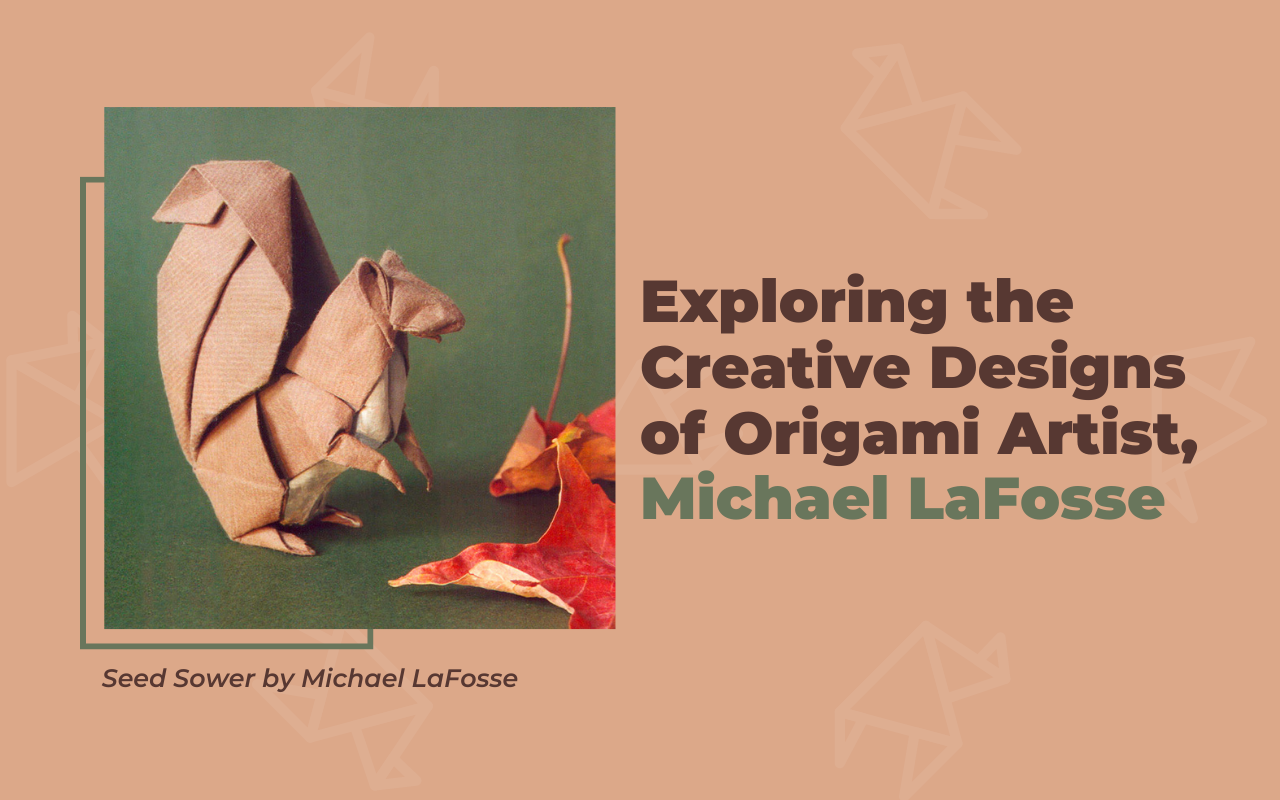 “Oru” means to fold, and “kami” means paper. Putting them together gives us the Japanese word “origami,” the internationally accepted name for the art of paperfolding. From simple to extremely complex, folding paper into birds, butterflies, flowers, squirrels, dogs, cats–and the list goes on and on– has enabled Michael LaFosse to build a career. Along with Richard Alexander, they created Origamido Studio,  https://www.origamido.com/the-artists/michael-g-lafosse/ a teaching center and design studio.

Since November 11th  has been proclaimed World Origami Day, I thought I’d call on my friend Michael and ask him why origami is so popular and how he came to make it his career.

I first met Michael years ago when he worked with my mother at the Williams Bookstore in Williamstown, Massachusetts (also home to Williams College). My mother told me to watch Michael gift wrap books because even that was an art to him. (He also taught me how to make baklava, but that’s another story for another day.) Thus, I share my interview with Michael and his marvelous work in the art of folding paper.

Grace: So, Michael, how old were you when you started creating origami?

Michael: I began folding origami when I was five, learning from books and friends. My designing phase began after reading an August 1970 Reader’s Digest article about Japanese origami master Akira Yoshizawa. I was thirteen. The article had photos of his amazing creations that were lifelike and beyond anything I had seen or folded. I did not realize one could invent new origami until I read about Yoshizawa and his passion for creating. Right then I knew that I wanted to be a full-time origami artist, just like Yoshizawa!

Grace: Did you take lessons or are you self-taught; if the latter, how did you learn?

Michael: I have been mostly self-taught. When I was in the first grade, I was fascinated by an origami demonstration I saw by chance on a PBS TV show. The host demonstrated how to fold a balloon from a paper square, and he suggested borrowing books about “origami” from the library. Back in the 60s, there were few books about it, and the projects were relatively simple. I quickly ran out of projects, but from these fundamental projects, I was able to develop and innovate more advanced manipulations for origami, which gave me some success and recognition as a budding designer. I had become an early contributor to the art.

Grace: When were you “discovered?”

Michael: I credit Richard Alexander for “discovering” me. We met in 1988, and he saw the origami work I was producing—stored in shoeboxes! He thought these should be seen! I began working for his environmental consulting company, which used video extensively. We began to document and promote my work, creating origami art and producing video lessons on cassettes for sale. In 1993 we filled two floors of Lasell University’s exhibit galleries in the Yamawaki Art and Cultural Center in Newton, Massachusetts, and it was then I began doing origami full-time. In 1996, we co-founded the Origamido Studio, and rented a storefront in Haverhill, Massachusetts for the next 12 years.

Grace:  What do you do with origami?

Michael: Origami has many aspects, so it is pretty versatile. Many use it as a pastime and for decorating, especially for making greeting cards and tree ornaments for the holidays. Origami is now commonly used in advertising, illustration, packaging, and product design. Nevertheless, origami has exploded beyond those traditional bounds and is now a design tool for architects, engineers, and even for creating deployable devices for space applications and medicine. It is also blossoming in the fine arts. Since origami is such a recent art there are few practitioners who are well qualified and available for hire. So, we find that we must be all things origami to all people: We teach, design, fabricate and build exhibits, write how-to books, make custom papers, and collaborate with other artists by licensing our designs for commercial uses.

Grace: You say teaching, is there a purpose to what and how you teach?

Michael: We generally teach those interested in learning the art, but we are often hired to teach educational enrichment programs in schools. Some schools have had us return, year after year, for over twenty years! They say our enrichment presentations are their most popular programs. Origami is a wonderfully engaging way to learn math and geometry. The students love it.

Grace: How do you come up with ideas for your creations?

Michael: My formal training is in biology and natural history, and so I am often inspired by the plant and animal subjects around me that I study. Nevertheless, many of my designs are projects that are based on themes and subjects that our customers suggest.

Grace: Tell us about the giant squirrel

Michael: The squirrel sculpture is named Seed Sower and depending upon its size it is a painted cast aluminum or bronze sculpture, the largest being the monumental measuring 86″ high. These were created as a collaborative effort with sculptor Kevin Box of Box Studio in Cerrillos, New Mexico. The casting was developed from my original origami squirrel. Kevin uses a unique process that he developed especially for creating such pieces. Check out the traveling exhibit, Origami In the Garden, to see these amazing pieces.

Michael: We have presented origami workshops at museums, libraries, schools, origami conventions, corporate events, and even in retail specialty shops, such as book and jewelry stores. We customize the themes and models to suit the needs and skill levels at each venue. Origami workshops or lessons here in our home studio can range from beginner to advanced. We handle small groups or families and their friends (up to six people). Most come for private lessons. These are for advancing students and are similar in approach to taking music lessons. I coach each student in technical and artistic areas of development, assigning “pieces” and studies calculated to help the student achieve their goals in the art. We have taught as many as 100 at a time in our onsite presentations at various schools or conventions. We also offer hand papermaking workshops at our home studio in the summertime.

Grace: Why is origami so unique/special?

Michael: I like to think of origami as a “Da Vinci” activity. It is both art and engineering! Its greatest appeal seems to be that you can transform a single piece of paper, sometimes dramatically, only by folding! Origami is also a metamorphic art form. Many compare its magic to the metamorphosis of a caterpillar into a butterfly. We love the simile, and so we use one of my favorite origami butterfly designs as our studio emblem. I also love that you can make origami anywhere – without special equipment or fancy materials. Even a dollar bill or a found bit of scrap paper can be transformed into something special. It is so engaging that one can easily make new friends through folding paper, as I often do when traveling. People can easily share origami even without the benefit of a common language.

Grace: What are your plans for World Origami Days?

Michael: I shall spend this last day of World Origami Days by visiting a family who regularly studies folding with us. Of course, we will be folding some origami, but as it happens, I shall also be sharing my family’s baklava recipe!

We also acknowledge November 11th as Veterans’ Day based on the end of World War I (considered at the conclusion of the conflict as “the war to end all wars” – but that sadly would not be true) when a ceasefire agreement was signed at Compiégne, France, at 11:00 a.m. on November 11, 1918. Chosen by the Nippon Origami Association date for World Origami Day it matches the concept of “peace” because one of Japan’s symbols of peace is the origami crane.

It’s a heartfelt day of remembrance for everyone as we continue to hope for world peace on this important day. 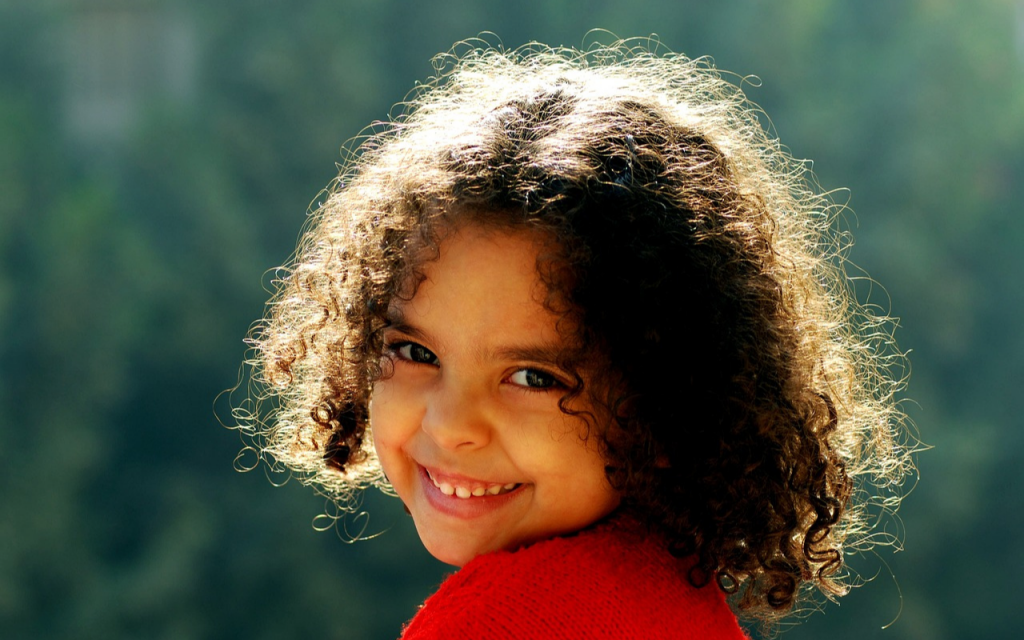