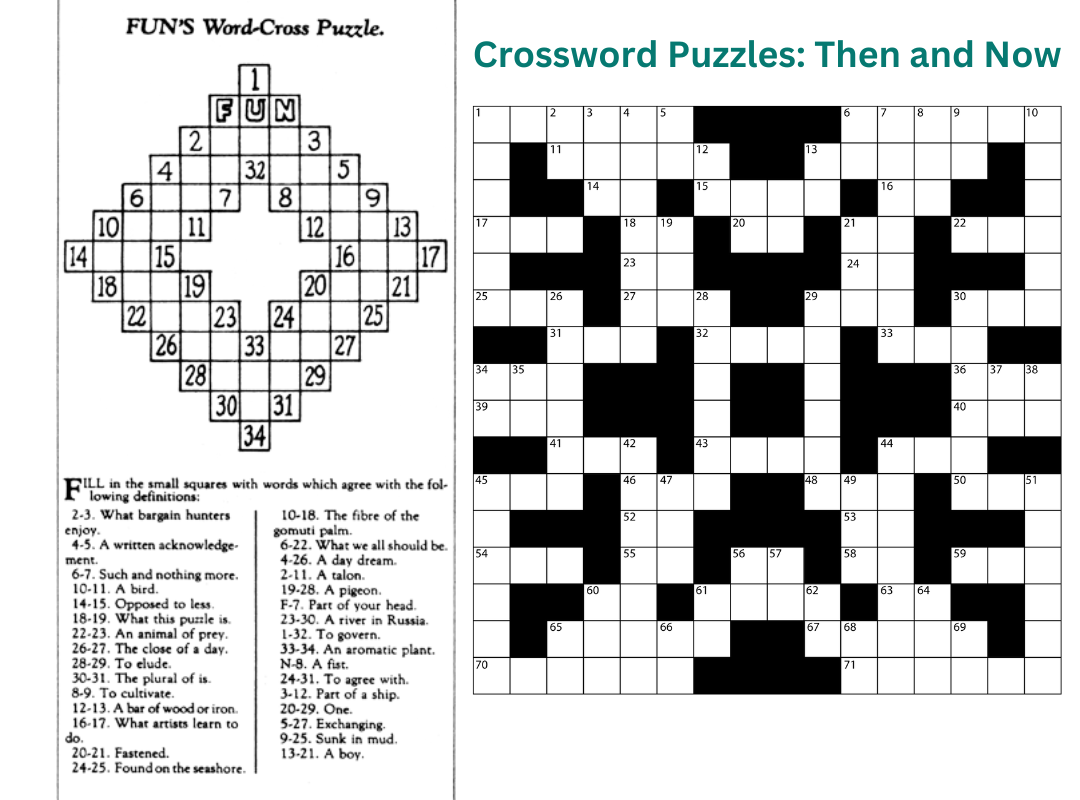 When my daughter was home for spring break from college one year, she decided to “do” crossword puzzles, which actually meant the whole family would “do” crossword puzzles. “Six-letter word for New York State,” she’d call out and someone would answer, “Empire.” Thus, it became a family affair.

My father-in-law, Stan, did the newspaper crossword puzzles every day – IN INK! We are still all in amazement about that fact! Personally, I simply cannot spell so I can’t do the paper crossword puzzles, but I do enjoy the online puzzles where it can tell you when you enter a wrong letter, or it can give you the answer if you ask. I did very well playing Scrabble on Facebook a few years ago, but again, it would tell you if you entered something that actually wasn’t a word.

Considering crossword puzzles appear to be the most popular and widespread word game in the world, the game has a very short history. Arthur Wynne of Liverpool, England, created the first crossword puzzle calling it “FUN’s Word-Cross Puzzle” when it appeared in a Sunday newspaper on December 21, 1913. It doesn’t look like our puzzles of today since it was diamond shaped and had no black squares in sections. A few weeks later the puzzle appeared with a typographical error changing the name to “Cross-Word.” The date of the first puzzles preceded the beginning of World War I and thus provided a much-needed diversion when the world plunged into the horrors of war. The crossword puzzles provided a daily time for entertainment along with mental agility. Crossword fans became “cruciverbalists” and found them helpful to endure the frightening war.

As the world moved into the 1920s, other newspapers discovered the now favorite puzzle; within a decade it was featured in almost all American newspapers. The puzzle boomed and changed in format, often appearing in a variety of shapes and sizes. Although many puzzles were carefully edited, some were riddled with errors.

At first The New York Times refused to include the new game as it had refused all games other newspapers would feature. Although readers requested the inclusion, the newspaper even ran editorials labeling the Cross-Word as a passing fad. Their moral high ground related to the Times history of refusing any type of yellow journalism. Basically, the editors thought the paper was already of value to all readers and should not rely on a game to enhance its readership. What would become the very famous Times crossword appeared on February 1, 1930.

The only downside to the puzzle’s success arose from librarians who dealt with the fans swarming the reference desk in search of dictionaries and encyclopedias to assist in completing the puzzles and thereby giving less time for them to deal with what they labeled as “legitimate” readers and students.

If we feel that solving the puzzles proves to be difficult, how about making one? The New York Times ran a series of articles a few years ago related to the process involved in creating a puzzle. Authors and puzzle constructors Ben Tausig and Finn Vigeland explained their craft with this series which began publication on April 11, 2018.

The first obstacle is devising a “theme” and the words need to relate to the chosen theme. Tausig and Vigeland state the overwhelming first query centers on what will be first – the theme or the grid. Tausig describes the thought process, “most themed grids are diagonally symmetrical for aesthetic reasons” followed by an example the pair presented as a run through of a possible theme. Their example focused on a beginning base from the topic “games” and their manufacturers which emerged from a brainstorming session based on “RuPaul’s Drag Race All Stars” and the winner, Trixie Mattel. Thus, Mattel appears important as they continued to keep track of the number of letters in each word expanding their words related to Lego and Legoland, while moving on to related words, “Yo-Yo, Doll, Barbie, Puzzle, Jacks”; however, they determined that although the limitations and feel of this theme is good in principle, “it could run dry.”

They move onto puzzle phrases the likes of which include, “Jigsaw Puzzle, Puzzle Piece, Puzzle Competition …” and from there they find expanding the theme gives more possibilities for words in the crossword puzzle. They turn around, start again, find new words and cross themselves back and forth until they move into the grid which is covered in a later article published in May. And hence they begin.

David Steinberg and Nathan Last explained the next steps to create a crossword which involve setting the black spaces and the words into the grid. They clarify the process stating there is a lot of trial and error. First, they need the best tool or sometimes just using a pencil and paper. “Crossword Compiler” generates a puzzle, but other less-expensive software is also available. The article included graphics of working with the software. The developers need to start carefully because words that are too long will limit their selections as they progress. The New York Times evolves the puzzles over the week so if you look at the patterns altogether, it is apparent they get more complicated as the week moves forward.

And then there are rules. No section can be completely cut off from the rest of the puzzle by black squares. All entries in the grid must be at least three letters long. Using a word with a “U” should have the U in the middle of the word so the other words with “U” fit easier. Add one or two bonus words that don’t fit with the theme because they can be lively (containing a “Z” or another complicated letter – which would be bonus high-pointers in Scrabble).

And just because it’s not complicated enough just yet, bonus words should progress down, not across.

For more complication and satisfaction include words with more than one bonus letter (like “U” and “Z”). Designing the puzzle with a black square under the “U” will make for more complications for the “filler” who are the people who continue the next steps in the building of the puzzles. But fillers might be computer programs so the designers can drive a computer program a bit crazy and not a person!

Eventually, they achieve their goal, and a crossword puzzle has been created.

Thank goodness or people who have a mission to find themes, grids, black cells, and words so people from all walks of life and in many mediums can find the fun involved with “FUN’s Word-Cross Puzzle.”